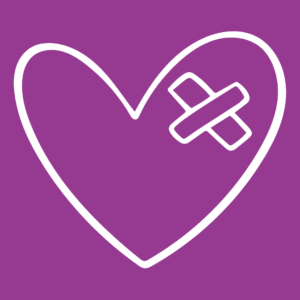 My cheeks betrayed me as they burned red with shame. Which then just made me so angry. The bottom had just dropped out and I had no come back.

It was my first year of high school and my so-called best friend had just told me I couldn’t carry a tune. In a very smug, sassy, not-very-sensitive kind of way. She was in Chorus, so that of course made her the authority on my awful singing voice.

I LOVED to sing and even (very privately) dreamed of being in a band. But I knew I wasn’t a great singer and couldn’t carry a tune without background music to guide me.

But to hear her say it. Out loud in the hallway. I crawled back into my shell. Pissed off and feeling intense betrayal and confusion.

My adolescent self didn’t have this awareness back then, but this is what it meant: I didn’t belong. My feelings and dreams weren’t safe to share. I wasn’t good enough for the team.

As fast as I could, I stuffed that red-hot anger and shame.

And I didn’t dare sing in front of anybody for a verrrrry long time.

I didn’t know about this thing called the Sister Wound. What I did know was that it felt emotionally safer being around dudes. No big talks about feelings or vulnerability, even with the gay guys. And they hardly ever tried to steal my boyfriend. 😉

I had a close gal pal in my twenties but that relationship went up in flames when I found out she was dating my ex and had been lying to me for months about it. (All this after sharing with her that my spidey sense told me there was a mutual attraction/flirtation going on while I was still in what was a serious relationship.)

Repeatedly over my life, I experienced betrayals by other women. Mother figures walking out on me. Sisters betraying my confidence.

And that feeling that I had to compete with other women to somehow be successful. So rather than compete, I bowed out altogether. I stopped trying to connect at a deep level with other women.

I stopped trying to belong. I became the Lone Rangerette, peddling as hard as I could to make it all happen on my own, wondering why I was so lonely. With NO ONE cheering me on. No community of sisters to share my heart with.

Always on the outside.

And secretly wondering if other women felt this way, too.

Western society, with its emphasis on ‘rugged individualism’ (a tenet of colonial thinking) has pitted all of us against each other.

This is by design. It’s another means of control and manipulation, intended to keep us disconnected, unhappy and endlessly searching for pain relief.

What if I told you that you DO belong?

What if I told you that you are wired for connection, including connection to people of all genders, especially your sisters?

What if I told you that there is a place where you can feel seen, heard, appreciated? And welcomed just as you are?

A place where it’s safe to be YOU. Just as you are.

Would you join me there?

P.S. If you’ve always felt a sense of not-belonging, never really feeling safe to be your true self, I want you to know there is another way. There is a place where you belong, where your sisters will lift you up, where your gifts can shine, where you can be cherished and appreciated. If you’re sick and tired of going it all alone and are ready to be fully seen, heard and loved just as you are, please send me a message this instant.