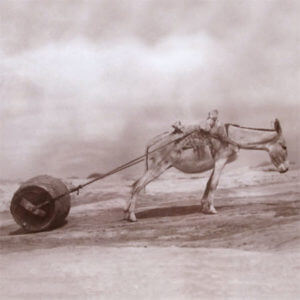 Why are we so silly sometimes, insisting on schlepping our burdens for months, years, decades? When, unlike this poor beast, we have the choice to simply set them down?

Why do we struggle?

I’d say that by the time I was 11 years old, I was definitely a little ass. My folks had moved us from rural New Mexico where there was one socio-economic class (poor as shit but content as hell) to the suburbs of New York City, where things were, um, just a little bit different. I was riding the bus home from the 6th grade one day when another kid asked me if I was a hick. (What? Did my hand-me-down Wranglers give me away?)

I felt totally humiliated and can almost feel the burn on my cheeks when I think back on it.

My parents split when I was two and both started new families. I spent my time living in two worlds, and never feeling like I fit in either one exactly. And now here I was in New York, still feeling poor as shit, but somehow not content at all. In fact, feeling more like an outsider than I had ever felt before.

That little ass wasn’t even remotely able to express that pain of not fitting in anywhere, even at home, but she did have the brilliant idea to protest.

I couldn’t stand how preppy everyone was in my middle school (the clothing was a visual indicator of my outsider-ness), so I made a T-shirt that read “No Preppies Allowed” with the Izod alligator behind the red crossed circle. (I wish I still had that shirt for posterity’s sake.) And yes, I wore that shirt to school. Imagine all the new friends I made!

I look back on that with a curious mixture of pride and shame. I’m proud of that little ass for campaigning against an obviously unfair class system, but I’m saddened at the way she did it.

That little ass was protesting, but she had it wrong.

Because it’s a little awkward protesting against your feelings – against that sense of not belonging.

‘Cuz it’s not like those 12 year old boys and girls were actually asking to be dressed like baby yuppies. Sure, maybe they liked the alligator (I mean, who doesn’t like those terrifying prehistoric creatures), but they were just wearing mostly whatever their parents told them to. (Remember, this was the 80s, it was different then!) And their parents were doing what most parents did in those parts: trying their best to send their kids to a really great public school and earn a decent living in nearby New York City.

I have often wondered what the other kids thought of that shirt, or of me the wearer of it. Did they see it as an arrow aimed right at them? I don’t recall a single classmate or teacher ever asking me about the shirt, or why I had made it.

Part of the shamey feeling comes from me knowing that it took me several decades to put down that burden of not belonging, of not being good enough to be in the group, of being the perpetual outcast. And in those many decades, I carried this burden that I could have so easily laid down, and had I done so, life would have been a lot more fun, ease-ful, and well, less shitty feeling. I might have made many more and deeper connections with awesome people.

But I also take great heart in realizing that over these years, I have gathered my tribe of people who have continued to love me even when I’ve been an ass. And now as I evolve faster and faster, and break out of the tired old constraints I used to call ‘home’, I have the honor and privilege of intentionally collecting my misfit tribe, who as it turns out, are perfect, just the way they are.

To all the Flourishers among us, rejoice in these burdens for all the lessons they bring us, and then lay that shit down. It’s time to run free.