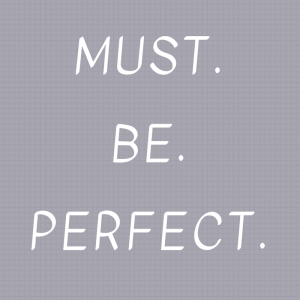 I used to describe myself as “particular” or “detail-oriented.” I was steadfastly focused on the big stuff and also the minutia. Everything mattered. To say I was tight and controlling was an understatement. I’d tweak out on every aspect of an art project, and grant or exhibition proposals were the worst. I’d spin and spin in my head, wrestling with each and every decision, and weighing the pros and cons of my choices. You can hardly say the work was inspired. Rather, I had a chokehold on it.

My deliberation would lead to procrastination and analysis paralysis. But then the stress of looming deadlines would kick in, giving me laser-beam focus and everything else would fall away. I’d forget to eat, or pee, and I’d put in ridiculously long hours to make sure that my work was nothing short of perfect. (Can someone please remind me how perfection is actually measured?)

Perfection mattered most in the areas of my life where I felt the least secure. I would never tweak out while chopping veggies for a pot of beans. (I make kick ass beans.) But in my artist life, I never felt secure about my work or even my identity as an artist.

And on that deeper level, I knew that if anyone found out about who I really was inside (as in, who I saw myself to be), it would be over for me.

So I worked hard. Really hard. Struggling through video production. Sourcing the “perfect” materials for an installation. Obsessing over which images to choose to represent my project and at what sizes should they be printed? And sure, these are all important and necessary things to do when creating art exhibitions.

But since I was so busy unconsciously worrying that someone would find out how shitty I was on the inside, or that there were so many other, better artists around, I wasn’t having very much fun. In fact, I was miserable.

It’s wretched and painful pretending to be something you are not.

Perfectionism nearly killed me, because in its name, I worked myself into the ground. Instead of doing my work out of love and joy and respect for the process, and myself, I was doing it out of fear and so much shame. I was unconsciously using my art practice to get the healing and catharsis I needed.

It all broke apart in February 2014. Total collapse of body, mind, heart, and spirit. Everything came to a snail’s pace. I wanted to call it quits. I prayed for mercy.

I found guides to hold the flashlight for me. Bit by bit, I did the work; sometimes reluctantly, sometimes exuberantly. The old patterns came up for review. I revised. I edited.

And lo and behold, all that stuff I used to feel, it got a lot lighter. Life got a lot easier. My thoughts and I are no longer adversaries. (OK, sometimes we still argue.) But those voices that drove me to perfection, that told me nothing was ever good enough, that I wasn’t good enough, well, they quieted way down.

I won’t lie; I’m still pretty “particular” about some things. I own that and am working on it. But that shame I used to feel that drove me so hard, it’s been dismantled piece by piece. I’m confident now, instead of just pretending to be. (You’ll know it when I’m not feeling confident because I’m much more comfortable being vulnerable now.)

I can be grateful now for that sickly shame that compelled my hard work. If it weren’t for that drive, I wouldn’t have produced some work that I really am proud of. That drive allowed me to do some pretty cool stuff, some of it rather herculean, even.

But I’m ready now to do it another way. I’m ready for my work to be inspired by love and truth, compassion and wisdom.

So Perfection, old friend, we’ve walked a long way together. I’d say I learned a lot, and for that I’m grateful. But I think it’s time to part ways.

If you have a chokehold on your life, or are compressed by the downward forces of perfectionism and self-doubt, have a convo with me. It’s free and I’ll share resources to help you find your way out from under it.